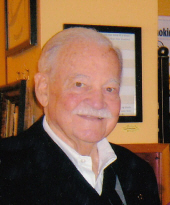 Robert Francis McKiernan, born on May 20, 1933, beloved husband and father, passed away unexpectedly December 1, 2013. Born in New Haven and raised in Hamden, Conn. by the late Francis and Grace McKiernan, he is survived by the love of his life of 56 years, Dorinda Connors McKiernan, and his children, Brian McKiernan of Hamden, Hollie Ann Sipperley of Locust Valley, NY, and Kelly McKiernan of Brooklyn, NY. He is also survived by his son-in-law Allan Linder, daughter-in-law Maureen McKiernan, and his cherished grandchildren, Molly, Robert, Ryan, Kailey, Megan, and Erin. Robert was predeceased by his sister Hollister McKiernan. As a native of Hamden, he was a player on the original Lyn Patrick's Pee Wee hockey team in 1948 and later was a varsity goalie at Hamden High School. In 1950, Robert served as a Sergeant in the 25th AAA Battalion in the Korean War until 1953 and was awarded the Purple Heart. Once he returned home, Robert became an active member in his community, receiving a Junior Chamber of Commerce Service Award along with the Hamden Junior Chamber of Commerce Rookie of the Year Award. He was the CDAP Coordinator for the town of Hamden, involved in the JC's, was one of the founders of the Hamden Youth Hockey program, Chairman of the Zoning Board of Appeals, and was heavily invested in the Democratic Party of his hometown. An alumni of Quinnipiac University, he received his Bachelor's Degree in 1971. He remained passionately involved, encouraging and supporting the college to pursue an active hockey team. He served as a member on the Athletic Board until his death. He was a widely respected business man, once being part owner of the Hamden Sports Village and retiring from his career as the owner and operator of Recycling Services Incorporated of Connecticut.The family wishes to express their gratitude to the SICU staff of St. Raphael's Hospital of Yale. His funeral will be Thursday at 10:00 AM from BEECHER & BENNETT FUNERAL HOME, 2300 Whitney Ave, Hamden, followed by his Mass of Christian Burial at 11:00 AM in St Joan of Arc Church. Friends may also visit with his family at the funeral home on Wednesday from 5 to 8:00 PM. Interment with Military Honors will take place in St. Mary's Cemetery, Hamden. Contributions in Robert's memory may be made to: Disabled American Veterans, P.O. Box 310909, Newington, CT 06131 www.DAV.org or to Quinnipiac University Athletic Endowed Scholarship, Quinnipiac University, AH-DEV, 275 Mt. Carmel Ave, Hamden, CT 06518.