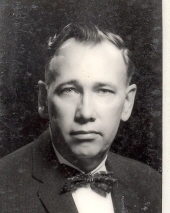 Meriden- Robert H. Hallbach, a four-year resident of Meriden Center died from congestive heart failure on Wednesday, February 23, 2011. He was predeceased by his wife of 65 years, Eleanor Faeth Hallbach. He was born Feb. 5, 1917 a son of the late Ernest 'Smoke' Hallbach and Mary Ficken Hallbach. Bob was the City of Meriden Assessor for 32 ½ years, retiring in 1985. He graduated from Meriden High School in 1934; attended American Institute of Banking, Hillyer College, Institute of Public Service at the University of CT., Rutgers, Lincoln Institute of Land Policy and took extension courses from U.S. Army Command and General Staff College as well as the International Accounting Society Inc. He proudly served his country in the U.S. Army during World War II for 51 months including 25 months overseas in Africa, Italy, and Southern France, participating in the invasions of Salerno, Anzio and Southern France. He took part in the invasion of Southern France that became known as the 'Forgotten Invasion'. He was a Captain and Company Commander in the Transportation Corp.. He was awarded the American Campaign Medal, the European-African- Middle East Campaign Medal with 4 battle stars and the WWII Victory Medal. Bob was awarded a certificate of recognition of service to the French government during the Invasion of Southern France in 1945, leading to France's liberation. He then served 15 ½ years in the U.S. Army Reserve Corp., with the rank of Major. Bob was an officer and director of the Hallbach Company Inc., The Hallbach Restaurant Inc. and the Ernest Realty Co. Inc., which operated the 1830 House Restaurant, the Hallbach Restaurant and several real estate entities. He was a past member of the International Assoc. of Assessing Officers, was awarded a life membership in the Connecticut Assoc. of Assessing Officers and hold life memberships in The American Legion Post #45, VFW Post#585, DAV post #6 and the Meriden Hall of Fame. He was a life sponsor of the Rosa Ponsella Foundation, a life member of Immanuel Lutheran Church, the Meriden Sportsman's Reunion Association, the National Right-to-Work Committee, a charter member of the Heritage Foundation and its predecessor, The National Advisory Board of the American Security Council. Bob was also a charter member of Citizen's Against Government Waste, a member of the Wallingford Family YMCA and a 1997 recipient of their Art Pagni Spirit, Mind and Body Award. He held designations of C.A.E. (Certified Assessment Evaluator) from the International Assoc. of Assessing Officers, C.C.A. (Certified Connecticut Assessor) and C.C.M.A. ( Certified Connecticut Municipal Assessor) from the State of Connecticut. He received commendations from the Court of Common Council in 1964 and from the City Council in 1985; Citation for Meritorious Service from the Legislators of the State of Connecticut in 1985. Bob was also cited for 'Meritorious Service' by the Board of Directors of the Meriden Hall of Fame Association and honored as its first 'Honorary Director For Life' in 1994. He also authored several articles and poems for local newspapers and other publications. He is survived by his daughters, Lynne H. Mooney of Meriden, Margaret H. McNair of Springfield, VA, his son R. Paul and his wife Carol A. Hallbach of Berlin, CT, granddaughters, Christine E. Ganter and her husband Allen of Meriden, Colleen M Perry and her husband Todd of Meriden, Heather L. Ruotolo and her husband James of Meriden and Tracey L. Offen of Springfield, VA and his great-grandchildren, Thomas Michael Offen of Wyoming, Max Evan Ganter, Alec Michael Perry, Luke Ethan Perry, Olivia Kate Ruotolo and Avery Faith Ruotolo all of Meriden. He also leaves a sister, Dorris H. Rochette, a brother and sister-in-law, George W. and Dorothy B. Hallbach all of Meriden, several nieces, nephews and cousins, a very special cousin, Helen Bober of Meriden and many friends at Meriden Center. He was predeceased by a brother Ernest E. Hallbach Sr. of Cheshire, sisters Florence H. Mosier and Edna H. Liedke of Meriden, brother-in-laws, James Mosier, William Liedtke and Joseph A. Rochette all of Meriden and a sister-in-law Madeline S. Hallbach of Cheshire. A Funeral Service will be held on Saturday, February 26, 2011 at 2:00pm at the Beecher & Bennett-Flatow Funeral Home,. 48 Cook Ave., Meriden. The Rev. Nancy Beckwith of Immanuel Lutheran Church will officiate. Military honors will be accorded following the service. Relatives and friends may call at the funeral home on Saturday from 10am-2pm, prior to the service. Burial in Arlington National Cemetery will be at a later date. In lieu of flowers donations in Bob's memory may be made to Immanuel Lutheran Church, Building Restoration Fund, 164 Hanover St., Meriden, CT 06451. The family would like to thank the staff at Meriden Center for all of the excellent care and kindness he received while he was residing there. A special thanks to Helen, Jessy, Savana, Kathy, Sharon and Carlos.