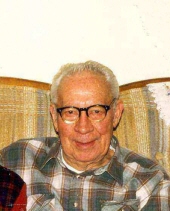 Robert H. Ruede, 84, of 114 Mildred Rd., Meriden passed away Friday, Dec. 2, 2005 in Hartford Hospital after a brief illness. He was the husband for 57 years of Adeline Michalski Ruede who predeceased him in 1999. Mr. Ruede was born in Meriden, Nov. 3, 1921, a son of the late Robert O. and Bertha Schafrick Ruede and was a lifelong resident. He was employed as a plating foreman at the International Silver Co., Factory H of Meriden for over 40 years prior to his retirement. He was a longtime member of St. Joihn Lutheran Church of Meriden and served in the U. S. Army as a Staff Sergant from 1942-1946. He is survived by a daughter, Mary Ann Ruede of Meriden, two sons and and daughters -in-law, David J. Ruede and Carol Layne of Needam, MA, Mark R. and Mary Ruede of Hartford, five grandchildren David Scott Ruede, Rebecca Ruede, Mark Rude, Jr. and his wife, Hannah Ruede, Daniel Ruede and his fiancee, Kristen Ferraro and Olivia Allen and two great grandchildren, Wesley and Kassandra Ruede.He was predeceased by a sister, Betty Ruede and a brother, Roland Ruede. Funeral service Tuesday Dec. 6 at 10 a.m. at BEECHER & BENNETT-FLATOW FUNERAL HOME, 48 Cook Ave., Meriden. Rev. Wallace Merdinyan will officiate. Interment will be in Gethsemane Cemetery. Relatives and friends may call Monday from 5-8 p.m. at the funeral home. Memorial Contributions may be sent to the charity of one's choice.