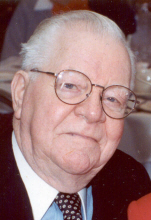 Robert Jay Mitchell, 84, of Hamden, passed away on April 24, 2012 after a long illness. He was born in North Attleboro, MA on February 23, 1928 to the late Leon and Madeline McNulty Mitchell. Robert leaves his beloved wife of 63 years, Kathleen O'Brien; daughter, Joanne Mitchell of New Haven; granddaughter, Tina Geer Rodriguze of Charlestown, NH. Besides his parents, he was predeceased by his son, Robert J. Mitchell, Jr.; brothers, Leon G. Mitchell, Jr. and Raymond Mitchell; nephews, Leon G. Mitchell III and Joseph Mitchell. Robert grew up in New Haven before moving to Hamden where he and his wife raised their family. He was a WWII Army Veteran. For 25 years he worked as an insurance agent for Prudential and also worked for Comcast Cable for many years. He had volunteered his time at the Hospital of St. Raphael for 17 years, was a member of the Nights of Columbus, and the Model A Club. Robert had an appreciation for old cars, enjoyed the computer, old movies, and music. BEECHER & BENNETT, 2300 Whitney Ave, Hamden will be taking care of the Private Arrangements. Contributions in Robert's memory may be sent to the Hospital of St. Raphael Foundation Inc., 1450 Chapel St, New Haven, CT 06511.