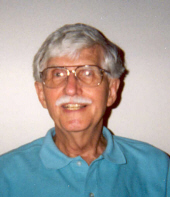 Robert John Dulin, of 760 Mix Avenue, Hamden, died on November 5, 2007 in Hamden after a brief illness. Born on June 4, 1932, in Bridgeport, he was the son of the late Andre and Katherine Elias Dulin. He is survived by his loving wife Gloria DuBrow Dulin, his adored daughters, Susan DuBrow of Hamden and Margie DuBrow of Philadelphia, and his brother Edward and wife, Virginia, of Shelton. He also leaves his three nephews, one niece, and two grandnieces. He was predeceased by three brothers Andrew, Steven, Joseph, and a sister Helen. If ever there was a kind and gentle man, it was Bob. His creed was kindness to all people. His family was his pride and joy, as was he to theirs. Funeral service at BEECHER & BENNETT, 2300 Whitney Ave., Hamden, Wednesday, November 7th at 11 a.m. followed by a burial at Beaverdale Memorial Park. In lieu or flowers memorial contributions in Robert's name may be sent to the organization of your choice.