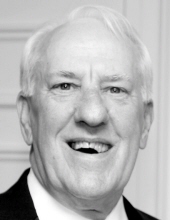 Robert M. 'Bob' Weigold, 81, passed away with his family and friends by his side on June 13, 2018 at MidState Medical Center after a brief illness. He was the beloved husband of Maureen Shaw Weigold. Bob was born in New Haven on May 26, 1937, son of the late Louis and Rosina Mitchell Weigold. Growing up in New Haven, Bob graduated from Hillhouse High School before honorably enlisting in the US Army National Guard. A lover of cars, he was a member of the CT Coachmen, New Life Church in Wallingford and the Lions Club of Saranac Lake, NY. Along with his wife Bob is survived by his daughter Barbara Campbell and her husband G.T. of MA; sons Alan Weigold of UT, Robert Weigold of NH, and Matthew Weigold of Meriden; grandchildren Elizabeth Ann Kaminski, Aspen Weigold, and George Campbell; great-grandson Walter Kaminski; two nieces and one nephew. He is also survived by his brothers-in-law Brian Shaw (Eleanor) of Hamden and Hal Shaw (Lorraine) of FL; and very good friends Dexter Crowley (Ann) and Al Volpe (Marge). Bob was predeceased by his sister Lucy Gale; and a nephew. Bob's family would like to extend a special 'Thank You' to the nursing staff and doctors of MidState Medical Center for their excellent care and service. Bob owned several service stations in New Haven on Dixwell, Whalley and Fitch. While working as a young man at the station on Dixwell, he acquired the nickname 'Sam,' which is known by only few. He was later a partner in Eagles Brothers/Tire Country in North Haven. He worked at Summit Handling managing their location in Agawam, prior to his retirement. But he never retiredafter moving to Loon Lake, NY, he worked for a contractor, and after moving to Natick, MA, he drove cars for MetroWest Subaru. He gave up driving cars for Subaru to pick up his grandson George everyday from school. Bob enjoyed being outdoors in nature, either fishing or taking walks with his beloved Guinness. He enjoyed working on cars and was a lifelong mechanic, working on any engine he could find. Bob's motto was: 'If man made it, I can fix it.' As his wife Maureen said, 'Bob knew a lot about a lot of things,' and his advice was often sought after from any of his four children; whether it was about a car, a house project, or figuring out what pesky animal was getting into their garbagehe always somehow knew. He was a really good friend and could always be relied on, and that shows in his 75 year friendship with Dexter Crowley. Bob cherished his years spent in Loon Lake, NY: fishing for bass, cruising around on a snowmobile, or acting as a guide of sorts to the best fishing spots on the lake. And in later years, he could be found watching car races, tinkering with his HO trains for his grandson George, or enjoying his time with his wife and friends. He didn't tip his glass often, but when he did he would always say, 'Here's looking at you.' And we'd like to say, 'Here's looking at you, Bob Weigold.' Relatives and friends are invited to visit with Bob's family on Wednesday, June 20, 2018 from 5:00 to 8:00PM at New Life Church, 350 High Hill Rd., Wallingford. His funeral service will be conducted Thursday, June 21 at 10:00AM in the church. Burial will be private. In lieu of flowers, donations can be made to MidState Medical Center Pavilion B, 435 Lewis Ave., Meriden, CT 06451.