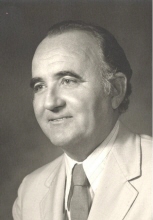 Robert Nordstrom, 91, husband of 62 years to the late Jean (Adams) Nordstrom died peacefully on Friday, September 21, 2012 Bob enjoyed a full life and will be sadly missed by those whose lives he touched. Bob joined the Coast Guard where he served as a flight engineer during World War II. It was here that he met his future wife Jean. After serving together, Bob and Jean married and returned to Meriden to raise a family. Bob's warmth and outgoing personality made him a natural salesman, and he excelled in his field for over 50 years. Bob loved being around people and was active in local politics serving as an alderman in Meriden for many years. In addition, Bob loved acting, performing in local productions and even appearing in several commercials. His other interests of travel, golf and cross-country skiing rounded out his active and rich life. He is survived by his sister, Ann Schroeder and a brother Donald Nordstrom, his four daughters and sons-in-law, Susan and Richard Seadale, Sara and Peter Hance, Kristi and Richard Ohanesian and Kathi and Tom Collins. He loved spending time with his eight grandchildren and five great-grandsons. A celebration of Bob's life will be held at Violi's Restaurant at Hunter Memorial Golf Course, 688 Westfield Rd., Meriden on Saturday, September 29th, 2012 from 2-4:30. The Beecher & Bennett Flatow Funeral Home, 48 Cook Ave., Meriden. has been entrusted with the arrangements. In lieu of flowers donations in Bob's memory may be made to the Alzheimer's Association at www.alz.org.