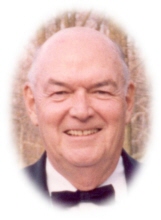 Robert Norman Watjen, 84, beloved husband, father, grandpa and friend, passed away Wed., March 28, 2007 at the Hospital of St. Raphael. Born in Jamaica, NY, Dec. 18, 1922 a son of the late H. Herbert and Sarah (Sadie) Haussler Watjen, he served in the US Navy during WW II and later was employed in metal sales with Scovill Mfg. Co and several other companies for over 50 years prior to retirement. Bob and his family relocated to Hamden in 1960. He joined Dunbar Church in 1963 and was an active participant singing in the Senior choir. He also acted as Church Moderator and served on other committees of the church. He is survived by Ann, his loving wife of 56 years, his brother Herbert Watjen and his wife Genevieve, of Palm City, FL. and Leicester, VT. He is also survived by his daughter Mary Ann Watjen and her husband Christopher Larson, an adored granddaughter Hayley Larson of Asheville, NC, a son Robert Watjen and his wife Susan of Natick, MA. He also leaves many nieces, a nephew and many wonderful friends. He was very social, sustained old friends and easily made new ones. Playing a few sets of tennis with his buddies was his cup of tea. He also enjoyed golf, reading, crossword puzzles, sailing and gardening. The highlight of his "musical career" included his role as Daddy Warbucks in "Annie" at the High Lane Club. A Memorial Service will be held Sat., April 7, 2007 at 2 p.m. at the Dunbar United Church of Christ, 767 Benham St., Hamden. Interment will follow in the church columbarium. Arrangements in care of BEECHER & BENNETT, 2300 WHITNEY AVE., HAMDEN. In lieu of flowers, donations may be made to the Memorial fund at Dunbar United Church of Christ, Habitat for Humanity of Greater New Haven, 37 Union St., New Haven, CT 06511 or the Alzheimer's Assoc., South Central CT Chapter, 2911 Dixwell Ave., Suite 104, Hamden, CT 06518.