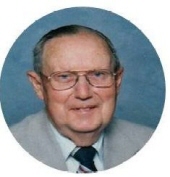 Robert S. Bebbington, age 92, of Hamden and Summerfield, Florida, passed away on August 14, 2013 in Florida. Born in Yardley, PA on May 10, 1921 he was a son of the late Frederick & Gertrude Purcell Bebbington. Robert was predeceased by his wife, Eileen Tilton Bebbington; his son, David T. Bebbington and his brother Frederick Bebbington. He is survived by his son, Douglas Bebbington of Monroe and his grandsons, Zachary and Jack Bebbington. Robert was a graduate of Pennington Prep School, the University of Pennsylvania, and the Wharton School of Business. He was a US Navy Veteran of WWII, serving on the USS Kline in the Pacific and a retired Industrial Engineer, formerly employed by Winchester Repeating Arms and the US Steel Companies. Robert was a member of the Hamden Elks Lodge # 2224 and the Mason Day Spring Lodge # 30. He also served as the Treasurer for the Hamden Boy Scouts, Troop 608 for over 25 years. He was an avid bowler and former President of the New Haven County Bowling Association and enjoyed his golf also. Friends may visit with his family at BEECHER & BENNETT FUNERAL HOME, 2300 Whitney Ave., Hamden on Monday, August 19th from 5:00 to 8:00 PM. During this time the Hamden Elks will do a Service for him at 5:30 PM. His Funeral Service will begin at 7:30 PM. Robert's interment will take place in Ewing Church Cemetery, in Ewing, New Jersey at 1:00 PM on Tuesday. Contributions in Robert's memory may be sent to the Hamden Elks Lodge #2224, 175 School Street, Hamden, CT 06518.