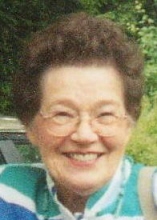 JACOBS-Roberta Brooks Jacobs, 79, of 2 Seymour Road, Woodbridge, died peacefully at home on July 16th, 2006. Predeceased by her husband of 39 years, Winfield Russell Jacobs, she is survived by two sons, Thomas Winfield Jacobs and his wife Susan Barba Jacobs and her daughter Alexandra Marie Czarkosky of Cheshire, and Charles Frederick Jacobs and his wife Kristin Malmisur Jacobs and son Ian Michael Jacobs of Kent, Ohio. Born in New Haven, she was raised on Summit Street in Fair Haven by her father, Frederick R. Brooks, a trolley conductor and bus driver, and Corinne S. Brooks, a homemaker and seamstress. She had one sister, Eleanor Brooks Flynn of East Haven, who passed away in 1999 at the age of 86. After graduation from Hillhouse High School in 1945, she began work as a librarian at Yale University's Sterling Memorial Library, eventually serving as the head of the Reserve Book Room. She suspended her career in 1964 to raise her children, but returned to the Yale library system in 1979, working in various capacities at Sterling, the Social Science Library, Beineke Rare Book Library, and finally Seeley G. Mudd Library where she was responsible for volume preservation and restoration. An avid and accomplished gardener, she found great joy in raising flowers and vegetables in her backyard garden during the summer and her home greenhouse when the weather turned cold. A devoted wife and loving mother and grandmother, she leaves this legacy to future generations. Friends are invited to meet directly in the Church of the Assumption, 81 Center Rd., Woodbridge at 10:00 a.m. on Thursday, July 20, 2006 for a Mass of Christian Burial. Interment will follow in Northwest Cemetery, Woodbridge. Friends may call on Wednesday, July 19, 2006 from 4-7 p.m. at BEECHER & BENNETT Funeral Home, 2300 Whitney Avenue, Hamden. Memorial gifts may be made to Connecticut Hospice, 680 Bridgeport Avenue, Shelton, CT 06484.