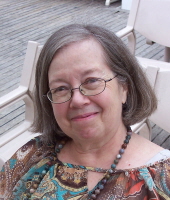 Roberta L. ('Bobbie') Brown , 70 years old, died peacefully at her home in Hamden, CT. on Saturday, January 11, 2014 after a long illness. Bobbie was married in June, 1967 to Dr. Thomas E. Brown; they have lived together in Hamden since 1974. In addition to her husband, she is survived by their daughter Elizabeth (Liza) Somilleda, their son, David Brown, their grandson, Noah Somilleda, and their granddaughter, Simone Somilleda, who live in Los Angeles. Born in Moline, IL on October 31, 1943, daughter of Rose and Robert Hallquist, Bobbie attended Rock Island High School and received her B.A. from Knox College in Illinois. She also did graduate studies in Literature at the University of Chicago and earned an M.A. in Special Education from the Southern CT State University and an MFA from the Vermont College Creative Writing Program. Her poetry has been published in a variety of literary journals. Bobbie devoted her life to caring for her family, creative writing, and the arts. Prior to her illness she enjoyed traveling throughout the world with her husband. There will be a visitation for friends from 5 to 7 pm on Thursday, January 16th at Beecher & Bennett Funeral Home, 2300 Whitney Ave. in Hamden. A funeral service to celebrate Bobbie's life will be held Friday, January 17th at 1 pm in the Whitneyville United Church of Christ at 1247 Whitney Avenue in Hamden. In lieu of flowers contributions may be made in Bobbie's memory to CT Hospice, 100 Double Beach Rd., Branford, CT 06405 or given online at http://www.hospice.com/donate.htm. Following the service friends are invited to join the family in their nearby home at 29 Ralston Avenue from 2 to 5 pm.