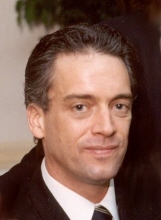 Roger Barry Thomas, Jr., 48, of Hamden passed away suddenly from injuries sustained in a motorcycle accident on August 2, 2009. He was born in New Haven on August 18, 1960 to the late Roger B. Thomas, Sr. and Judyth Capper Thomas of Hamden. Besides his mother, Roger leaves his two daughters; Christina Nunez and Elaina Thomas, both of New Haven and two sons; Patrick Thomas and Roger B. Thomas III both of West Haven. Sister Kim Thomas and her companion Mark Hicks of Hamden and nephews, Joseph and Jason Sabato, both of Bristol. He was predeceased by his sister, Holly Sequino. Roger grew up in Hamden and after graduating from Hamden High, he attended Wilcox Tech. At the age of 18, he began his work as a Sheet Metal Mechanic with Industrial Sheet Metal Corp. When he wasn't spending time with his children, or his nephews, he enjoyed fishing. Friends may visit with the family on Wednesday evening from 5 to 8 p.m. at BEECHER & BENNETT, 2300 Whitney Ave., Hamden. Burial will be private. Memorial contributions in Roger's memory may be sent to the Ronald McDonald House, 501 George St., New Haven, CT 06511.