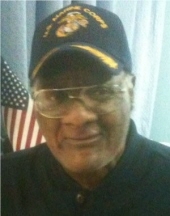 Meriden- Roland Eugene Barrington, also known as 'Barry' and affectionately as 'Dabba Doo', entered into eternal rest on April 12, 2010. Barry was born September 14, 1934 in New York, NY and was a son of the late Robert J. Barrington Sr., and Genevieve (Logan) Wiggins-Barrington. He proudly served his country during the Korean War where he earned several medals. Barry went to work as a mailhandler at the U.S. Post Office on Brewery St. in New Haven until his retirement. Always with a smile on his face, a joke or two to share, a song in his heart, and a lending hand to offer, Barry will truly be missed by all whose path he crossed. Barry leaves to mourn, his daughter, Robin M. Barrington of Meriden; grandchildren, Erica and Aaron (Sr.)Ganus of Meriden; great-grandchildren Asionne and Aaron (Jr.) Ganus, and Maliyah Durant of Meriden, and and Jayvion Sanchioni of Middletown; brother Robert (Jr.) and his wife Mary, Barrington of Milford; ex-wife Frances N. Barrington of Meriden; step-sisters Socorro Aguiilar and Yvette McKenzie of NY, and Chickie Masdeu of Fl; step-brother David Masdeu of VA; and a host of cousins, nieces, nephews and special life long friends Arthur, Peggy, Lee, Jeanette, Russell, Harrison, Shirley, Wilbur, Shirley, Cleasea, Debbie, Bill, Ed, Christine, Bobby, Vic and so many more that the family apologizes if they have failed to remember. Barry was predeceased by his step-mothers Ruth Barrington and Nellie Masdeu; his step-father Charles 'Chubby' Wiggins; step-sisters Barbara Barrington and Ruth John; and step-brothers Pete and Tony Aguliiar and Caruso Masdeu. The family wishes to extend their sincere gratitude to the Coccomo Memorial Health Care Center staff for the 'exceptional to none' care they gave to Barry that reflected in his quality of life, and the family also wishes to extend their sincere and deepest gratitude to everyone who has shown an abundant outpouring of love, comfort, support and sympathy in our time of grief. We would not have been able to endure this hardship alone. Relatives and friends may call at Mt. Hebron Baptist Church, 84 Franklin St., Meriden on Saturday, April 17, 2010 from 12noon-1pm. A funeral service will begin at 1:00pm promptly. Burial will be on Saturday, April 24, 2010 at 10:30 a.m. not 11:00 a m. as previously stated at the Ct. State Veteran's Cemetery, Bow Lane, Middletown, CT. The Beecher & Bennett-Flatow Funeral Home, 48 Cook Ave., Meriden is in charge of the arrangements.