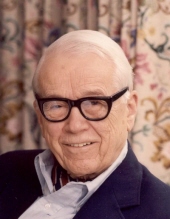 In New Haven, August 30, 2008, Roland M. Bixler of Woodbridge, husband of Margaret Triplett Bixler. He was born in Bluffton, Ohio on November 17, 1913, son of the late David W. and Dora Tschantz Bixler. Beloved father of Katharine B. Holt and her husband Robert W. Holt of Bethany and David R. Bixler of Woodbridge and grandfather of Ryan C. Holt. He was predeceased by a sister, Mareen Bixler. Roland was the President and Co-Founder of J-B-T Instruments, Inc. manufacturing electrical instruments. Active in many trade associations, he served as Chairman of the Board of the Electronic Industries Association, Board member of the National Association of Manufacturers and chairman of their Taxation Committee, testifying before the Senate Finance Committee, the House Ways and Means committee in conference with the White House and Executive Branch. He was a charter member of the Young President's Organization and the Chief Executives Forum. Roland served as a Trustee and Corporator of The Connecticut Savings Bank and helped found the former Connecticut Bank and Trust Co, serving as its President and Chairman of the Board. A graduate of Bluffton College, he served as a Trustee and later was awarded an Honorary Doctorate in 1981. From 1946 to the present, Roland was on the Board of Governors of the University of New Haven, instrumental in its transition from the former New Haven YMCA Junior College to the New Haven College, later to become the University of New Haven. He graduated from UNH with a Master's Degree in their Executive MBA program. He was awarded an Honorary Doctorate Degree in 1972. Mr. Bixler has served on many Boards of Directors, such as the Davenport - Dunbar Residence, Inc. where he was a founder, The Greater New Haven Chamber of Commerce, The Manufacturers Association of New Haven County, The New Haven YMCA, The Quinnipiac Council, BSA, The United Fund of greater New Haven, The Woodbridge Board of Education and Moderator of the Woodbridge Town Meetings. A long time active member of The Church of the Redeemer, U.C.C. he served on the Boards of Deacons and Trustees. A Memorial Service will be held on Saturday, September 13th at 11 A.M. at The Church of the Redeemer, Whitney Ave at Cold Spring St., New Haven. Arrangements with BEECHER AND BENNETT, 2300 WHITNEY AVE., HAMDEN. It is suggested that Memorial contributions may be sent to the Bixler Scholarship Funds at; Bluffton University, Bluffton, Ohio 45817 or the University of New Haven, 300 Boston Post Rd., West Haven, 06516 or the Church of the Redeemer.