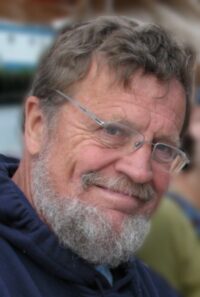 Ronald E. Westfort passed away peacefully in the early hours of Dec. 1, 2022, at Pilgrim Manor in Cromwell, Conn., after a long illness. He was 77.

Ron was born Feb. 13, 1945, in Meriden, Conn., to Robert and Elizabeth Westfort (Kroeber) and attended Platt High School. He was both an elite academic and an all-star athlete in football, basketball, and track. As quarterback and captain of the football team, many of his school records still stand unbroken, and he was later inducted into the Platt High School Athletic Hall of Fame. Ron graduated from Platt in 1963 and became the first in his family to attend college, earning an academic and football scholarship to Duke University. After a year, missing his high school sweetheart, Ann Wagner, he transferred to the University of Connecticut, where he continued to play football, graduating in 1967 with a degree in civil engineering. Notably, he received scouting offers from four NFL teams. Instead, after having joyfully married Ann in August 1966, upon graduation Ron began working as the town engineer for Danbury, Conn. He soon joined Brunalli Construction Company, where he had a 37-year career specializing in building bridges.

Ron oversaw projects throughout the state, including all the bridges on Route 84 from Hartford to Vernon, railway bridges, drawbridges, and restoration of small historic bridges in Connecticut’s colonial towns. He supervised the Hartford Civic Center foundation repair and reconstruction, and served as superintendent of the Mianus River Bridge reconstruction after its collapse in 1983. Upon his retirement from Brunalli, Ron spent a year as a bridge construction supervisor on the island of St. Croix, where he enjoyed snorkeling excursions to Buck Island Reef.

Ron and Ann moved to Durham, Conn., in 1969. Together they had three children, Michael, Jason, and Veronica, whom they brought up on their rural property complete with two barns and a pond that Ron dug himself. Over the years, Ron transformed the swampy landscape into a picturesque three-acre oasis, graced with majestic white pines framing the pond, which soon became the neighborhood swimming hole. Always frugal—and never one to sit still—Ron raised beef cattle, cultivated a huge garden, and could fix anything and everything, from household appliances to any kind of motor. He went on to purchase and renovate vacation properties on Lake Pocotopaug, East Hampton, Conn.; in the beach community of Green Hill, South Kingstown, R.I.; and on Lake Torsey, Mt. Vernon, Maine. A true DIY’er, Ron taught his children self-sufficiency, perseverance, commitment, and generosity of spirit.

Ron and Ann were hugely compassionate and warmhearted, fostering children and becoming summer hosts through programs to bring children from inner cities to their home. Ron was a “father” and mentor throughout the community, coaching baseball, softball, and basketball and leading Boy Scouts, all while caring for Ann through her battle with lupus.

After Ann’s tragic death in 1983, Ron met his longtime partner, Suzanne McNulty. Together they created a home for their combined five children, through the years welcoming countless family members and friends for holiday gatherings and warmly opening their home to anyone in need of a place to stay.

Ron loved having fun and was known to play just as hard as he worked. He enjoyed hosting parties and picnics by the pond in his Durham yard; joining in raucous Wagner family get-togethers at Moodus Lake; sunset sailing in Maine with Sue, martini in hand; taking family road trips to Florida; piloting his whaler across the Green Hill salt pond; feasting on steamers and lobster at the Maine family camp or at the Green Hill beach house; and vacationing in the Caribbean with Sue. He treasured time spent with his grandchildren, passing on his expertise and love of boating, fishing, and the art of just having fun. He loved dogs, especially Labrador retrievers, and always had a trusty sidekick close by. He was a devoted fan of the Boston Red Sox, the New England Patriots, and UConn basketball, a legacy his family continues with passion.

Adoring “Goppa” to 11 grandchildren, Ron will be remembered for tractor rides, especially the traditional Thanksgiving Day hayride; exploration in and around the pond and visits to the neighbor’s horse farm; hikes up Mt. Pisgah; goofy faces and silly jokes; and his bottomless capacity for love. He loved attending their events, cheering them on, and hearing about all their adventures, and he always encouraged them in every endeavor.

Ron was predeceased by his beloved wife, Ann Wagner Westfort. He is survived by his loving partner of 38 years, Suzanne McNulty; daughter Lisa Angell and her husband, Joe; daughter Leanne Slawinowski and her husband, Bruce; son Michael Westfort and his wife, Sarabeth; son Jason Westfort and his wife, Michelle; daughter Veronica Pasieka and her husband, John; and his brother and sister-in-law, Bob and Trudy Westfort. He also leaves behind grandchildren Ashlyn and Dane Angell; Leah and Evan Slawinowski; Brooke, Andi, and Reegan Pasieka; Eli and Miriam Westfort; and Adam and Rebecca Westfort, along with numerous extended family members and friends, who will all miss him and remember him fondly.

Visitation and a service will be held at Beecher & Bennett-Flatow Funeral Home, 48 Cook Avenue, Meriden, Conn., Friday, Dec. 16 from 4 p.m. to 8 p.m., with interment at Walnut Grove Cemetery on Saturday, Dec. 17, at 11 a.m. A gathering for family and friends will follow from 1 p.m. to 4 p.m. at Casa Mia at the Hawthorne in Berlin, Conn. Donations can be made to the Lupus Research Alliance in Ron’s name and would be gratefully appreciated by the family.