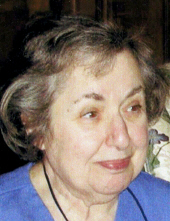 Rosalie M. Berberian, age 92, died peacefully Sunday, February 8, 2020 in her home in New Haven, CT under the care of CT Hospice with her family and loyal cat, Lily, at her bedside. She was born on April 16, 1927 in Lowell, MA to the late Khachig and Hripsme Arabian Marzbanian. She married the late Karnig A. Berberian in 1954 and they ultimately settled in New Haven, where they raised their son, Aram D. Berberian. In 1969 they fell in love with the fishing village Menemsha on Martha's Vineyard, where they continued to spend summers in their small cottage and Rosalie enjoyed beachcombing at the water's edge. Rosalie will be remembered by her son, Aram; his wife, Theresa; grandchildren, Katharine, Caroline, and Dmitri (her best boy). Rosalie was fiercely independent and an early feminist. For her entire life, she had a true love for learning which manifested itself in many ways. She earned post-graduate degrees from Yale University, where she was on the faculty at the School of Public Health and was engaged in research. Her curiosity could be piqued in many ways. A pastime of frequenting tag sales and flea markets turned into a full-time occupation after she retired from Yale when she and Karnig started ARK Antiques. Rosalie continued to do research as she collected and learned about American art pottery from the Arts and Crafts period. Eventually, she became president of the American Art Pottery Association. Shifting gears, Rosalie found a new and relatively unknown area of interest and ARK Antiques later became known as one of the leading authorities on American silver, jewelry and metalwork from the Arts and Crafts period. She loved teaching and sharing and helped many clients develop their collections. One of her favorite activities was to attend the annual Arts and Crafts Conference held in Asheville, NC where she spoke and held numerous group discussion sessions. In this way, she touched and inspired many people. Later, she won a Lifetime Achievement Award at the Conference for her contributions to the field. When she was 91, her book, Creating Beauty was published which represented the culmination of her scholarship in the field of American Arts and Crafts metalwork. She was extraordinarily proud of this accomplishment. Pragmatic to the end, Rosalie did not wish to have formal funeral services. Please honor her memory in your own way. She will be greatly missed by all those who loved her and knew her well. BEECHER & BENNETT, 2300 Whitney Ave, Hamden in care of arrangements.