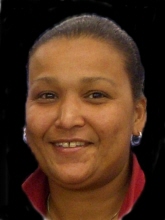 Rosalind Chatfield Da Re of New Haven, peacefully passed away on May 29, 2009. She was born in New Haven on January 7, 1966 to Danette Chatfield and Butch Chatfield. She had attended James Hillhouse High School. As a dedicated member of the community, Rosalind volunteered her time to American Indian Organizations throughout her life. Her commanding intelligence earned her the prestige of participating in the Ulysses S. Grant program at Yale University when she was only sixteen years of age; with this she was also offered a generous scholarship to Miss. Porter's boarding school in Connecticut; she graciously declined not wanting to be away from her loving family. Her American Indian and Portuguese upbringing contributed to her being a loving and kind person who cherished honesty and integrity. For those who would accept an honest and strong opinion looked to her for answers. Roz is the beloved sister of Albert Chatfield and Luella Chatfield. She is the aunt to David Leon Ellis, Jr, Rohan Chaedaine Brooks, Albert Brian Chatfield, Jr, and Alethiea Rosalind Chatfield. She will also be sadly missed by her stepmother Carol Lewis and Steven and Rosalind Dixon, Anita Fernandes, ex-husband Ray Brown, and a host of cousins and friends. A Memorial Service will be held at BEECHER & BENNETT, 2300 Whitney Ave., Hamden, on Monday, June 8th at 10 a.m. In lieu of flowers memorial contributions in Roz's memory may be sent to American Indian Movement Grand Governing Council, P.O. Box 13521, Minneapolis, MN 55414.