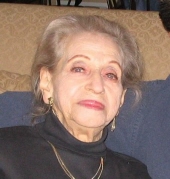 Rose D'Errico Swartz, 99, of Hamden, wife of the late Judson Swartz, passed away on April 26, 2010 at the CT Hospice. She was born in New Haven on January 2, 1911 to the late Michael and Philomena Vacchio D'Errico. Rose is survived by her son Edmund Swartz of Hamden and her favorite nephew, Vincent Lambert also of Hamden. She is predeceased by her siblings, Margaret Maisano, Marion Lambert, Roselyn Sullivan, Susan Fomento, Elizabeth Meresca, Anthony D'Errico, John Esposito, and Nicholas D'Errico. Rose grew up in West Haven and moved to Hamden in 1949. She was a parishioner of St. Rita's Church, was a terrific cook, and enjoyed the company of her cats. She was a people person and always enjoyed her job at WT Grant and other department stores in the area. Rose will be remembered for the care she showed for the people around her and for her willingness to sacrifice her own needs for her family. A Mass of Christian Burial will be celebrated at St. Rita's Church on Thursday, April 29th at 10:30 a.m. followed by a burial in Centerville Cemetery. Friends may visit with her family on Thursday morning at BEECHER & BENNETT, 2300 Whitney Ave., Hamden, from 8 to 10:00 a.m. Contributions in Rose's memory may be sent to Juvenile Diabetes Research Foundation, 2969 Whitney Ave., Hamden, CT 06518-2556.