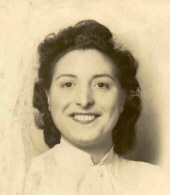 Rose DeMaio, age 87, of Hamden, formerly of New Haven, passed away on August 23, 2011 at Connecticut Hospice in Branford. Rose was the widow of Nicholas DeMaio. Born in New Haven on June 23, 1924 she was a daughter of the late John & Josephine Miliano Scialla. Rose is survived by her son Robert J. DeMaio of Los Angeles, CA; her sisters, Grace L'Manian of Hamden, Jennie McLean of Hamden & Frances Watts of Fountain Valley, CA and her brother Carmine Scialla of Hamden. She is also survived by several nieces and nephews. Rose was predeceased by her sister Mary Villano and her brother Joseph Scialla. Rose was a welder, employed many years for American Tube Bending Company. She enjoyed traveling and cooking and was a great bingo and card player. Friends may visit with her family at BEECHER & BENNETT FUNERAL HOME, 2300 Whitney Ave, Hamden on Friday, August 26, from 8:15 to 9:15 AM and may attend her Mass of Christian Burial at 10:00 AM in St. Mary's Church, 5 Hillhouse Ave, New Haven. Burial will follow in St. Lawrence Cemetery, West Haven. Contributions in Rose's memory may be made to - Sister Anne Virginie Grimes Health Care Center, 1354 Chapel Street, New Haven, CT 06511.