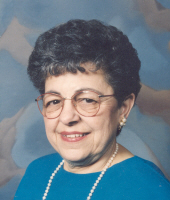 Rose Marie Manfredi Parisi, age 82, formerly of Hamden, passed away in Wallingford on May 6, 2012. Rose Marie was the widow of Guido Parisi. Born in New Haven on May 9, 1929, she was a daughter of the late Vincent J. & Ursula Porto Manfredi. Rose Marie is survived by her daughter Lynn Winters & her husband Robert of Sebec, Maine; her son Roger Parisi of East Haven; her grandchildren Paul Campagna, Michael Parisi, Jordan Winters & Andrew Winters and her sister Roberta Rolando. She was predeceased by her brother Francis 'Buddy' Manfredi & her brother in-law Joseph Rolando. Rose Marie was a resident of Hamden most of her life, she was formerly employed at the East Rock Quality Market. Subsequently she & her husband owned & operated the East Rock Package Store and later she retired from Olive Electric Company. Rose Marie also enjoyed her volunteer work at the Clifford Beers Clinic. Friends may visit with her family at BEECHER & BENNETT FUNERAL HOME, 2300 Whitney Ave, Hamden on Wednesday May 9th from 8:30 to 10:30 AM and may attend her Mass of Christian Burial at 11:00 am in St. Stephen's Church, Hamden. Interment will follow in St. Mary's Cemetery. In lieu of flowers contributions in her memory may be made to the Clifford Beers Clinic, 93 Edwards Street, New Haven, CT 06511.