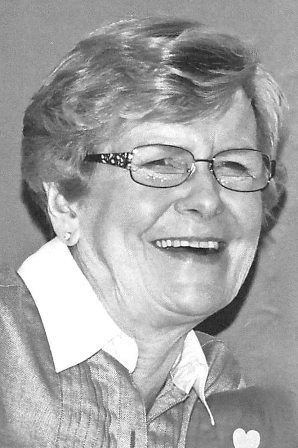 Rosemary Darby Slattery, 82, wife of 56 years to Paul W. Slattery, passed away at Whispering Pines in East Haven on December 3, 2020. Born in Everett, MA September 16, 1938, she was the daughter of the late James and Mary Moran Darby. Loving mother of Cathleen and Michael (Amy) Slattery and beloved grandmother of Jackson and Miley Slattery. Rosemary is also survived by her brother, James (Jane) Darby, and sisters-in-law, Alberta and Sheilah Slattery. She was predeceased by her brother, John “Butch” Darby.
Rosemary was a graduate of West Haven High School and Quinnipiac College. She worked as an administrative assistant at the Yale Medical School for 30 years, and also was the Administrative Director of the Yale Corporate Medical Program. A devout Catholic, Rosemary served two terms as President of the Catholic Charity League, where she helped raise funds for the Farnam Neighborhood House Summer Camp Scholarship for a number of children. When her children were young, Rosemary was very active in the St. Rita Home School Association. She also enjoyed being a member of the High Lane Club of North Haven, and taking annual visits to the coast of Maine with her family.
Due to concerns about social gatherings affecting us all at this time, services will be held privately. A Celebration of Life will be announced at a later date. In lieu of flowers, donations in Rosemary’s name may be made to the Alzheimer’s Association Connecticut Chapter, 200 Executive Blvd. Suite 4B, Southington, CT 06489, or to Connecticut Hospice, 100 Double Beach Rd., Branford, CT 06405. Arrangements are in care of BEECHER & BENNETT FUNERAL HOME, 2300 Whitney Ave., Hamden.