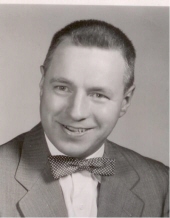 Roy 'Ken' Kenneth Jetter 07/28/1922 to 06/27/2015 Ken was born in Audobon, NY but grew up in Philadelphia. Mother, Imogene Harriet Crompton and father Benjamin Harrison Jetter. WWII: Ken was a Tech SGT, mechanic, with the 369th Bombardment Squadron ('Fightin Bitin'), 306th Bombardment Group, 8th Air Force in Thurleigh, England (1943-1945), serving as flight engineer/electrician and top turret gunner on B-17s over Europe. He also spent time in B-17s over North Africa late in the war. After WWII he went back to work for 'Hynes Electric Heating Co.' in Camden, NJ married Kay Jetter from south Jersey in 1947, and started college night school for engineering at Drexel University (Phila), graduating about 1954. He then went to work for 'Edwin L. Wiegan' / 'Chromolox' sometime in the mid 1950's, starting to move up the ladder, moved from Philadelphia to a home in Westfield, NJ, adopted is children 1956, 1957, then transferred to Wayne, OH in1960, then Greenville, PA 1962, then to Pittsburgh in 1965 before leaving Chromolox as VP Engineering Sales when purchased by Emerson Electric in 1968. Moved to Hamden, CT and took a job with 'Entoleter' as VP Engineering. He later left and started his own company 'Jettherm' (thermodynamic electrical pipeline heating) with a partner around 1975. He later started a home inspection service and continued that into retirement, especially liked the historic homes and had knowledge of old systems. He always enjoyed hunting (had Chesapeake Bay retrievers) and fishing and maintained large vegetable gardens. He was active in Hamden 'Civitan' (Civitan Intl.) and was a past president, etc., in the 1980's (70's-90's). He was also active with wife Kay in establishing the group home 'Friendship Gate' in Hamden in the 1980's, and was a politically active board member of Vantage Group supporting the handicap group home systems in Hamden and North Haven. Ken's father was an artist, and Ken started some painting and excelled at wood carvings (many detail-painted) into his retirement - entered and won ribbons in various events (birds, animals mostly, but did other items like carving/creating a semi-tractor trailer model for a client). Ken was a loving husband and father, predeceased by his wife Kathryn Batten Jetter and younger brother and sister: Ben and Betty (Benjamin H. Jetter Jr., and Betty Jetter Cagle). Survived by daughter Kathryn Ann Jetter of East Haven, CT and son Kenneth 'Scott' Jetter of Grand Prairie, TX. Granddaughters Megan Jetter Mizell of Garland, TX (with great grandson Addison Mizzel), and Heather Janet Jetter and Kayla Rose Jetter of Lufkin, TX. Friends are invited to attend his Graveside Service and Military Honors to be held on July 25th at 10:00 AM in the State of Connecticut Veteran Cemetery, 317 Bow Lane, Middletown, CT. Arrangements are in care of Beecher & Bennett Funeral Home, 2300 Whitney Ave, Hamden. Contribution in Ken's memory may be made to the Hamden Civitan International Club, P.O. Box 130744, Birmingham, Alabama 35213.