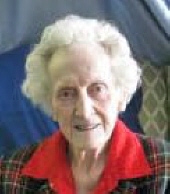 Ruby Doris Quimby Hull, of Meriden, passed away on December 10, 2009 at the Coccomo Memorial Health Care Center. She was born in Anson, Maine on April 30, 1909 to the late Elijah and Lucie Dinsmore Huggins Quimby. Ruby was the wife of the late Harry Hull of New Haven, CT. Ruby worked for many years as a chef and pastry chef at Yale University and also a nanny for several families in the New Haven, Woodbridge and Orange areas. Ruby was the last survivor of 10 siblings but has many nieces & nephews. She was the guest of honor at her 100th birthday party this past April. Ruby will be missed by her family and friends. BEECHER & BENENTT, 2300 Whitney Ave., Hamden, in care of the private arrangements.