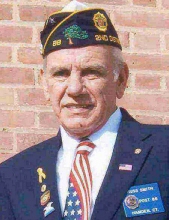 Russell Richard Smith, 65, of Ives St., Hamden, passed away Nov. 28, 2005, husband of the late Barbara Hession Smith. Born in Hamden, August 1, 1940, the son of the late Frederick W. and Gladys Crowther Smith. He is survived by sisters, June Corraro and her husband, Richard of Cheshire and Wilifred Cork and her husband, Robert of Bradenton, FL, as well as his loving friend and companion of 13 years, Faith Otto and many nieces and nephews to whom he was like a father. A proud veteran of the Navy, Mr. Smith was a member of the American Legion Post 88, past (2003) & present commander, a member of the 2nd District Command Staff, and a member of the Color Guard. He was a big supporter of our troops, especially during war time. Mr. Smith was also a past Exalted Ruler of the Elks 2224 BPOE in 1985-1986 and a former member of the Hamden Fire Dept. Besides being a talented carpenter he was an avid gardener and enjoyed fishing with his friends. Funeral service Sat., Dec. 3 at 11 a.m. at BEECHER & BENNETT, 2300 Whitney Ave., Hamden. Friends may call Friday from 4 to 8 p.m. An American Legion Service will be held at 7 p.m. immediately followed by an Elks service. In lieu of flowers please send memorial contributions to the American Legion Post 88,"Support the Troops", 3005 Dixwell Ave., Hamden, CT 06518.