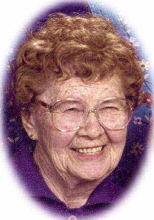 Ruth Anna DuPlessis Perry, 93 formerly of Meriden passed away Wednesday, August 31 at Chestelm Healthcare and Rehab. in Moodus. She was the wife of the late Gerald F. Perry. Ruth was born February 23, 1912 in Meriden a daughter of the late George L. and Anna (Nelson) DuPlessis. She worked in the office at New Departure and was a lifelong member of St. Andrews Episcopal Church. Her greatest loves of life were her family, gardening, going to flea markets and her beach place at Cedar Island. She is survived by a daughter, Joan D. Brown of East Hampton, two grandchildren and their spouses, Clayton and Laura Brown of Colchester and Holly and Thomas O'Connell of Monson, MA, three great-grandchildren, Sarah and Matthew Brown of Colchester and Kelly O'Connell of Monson, MA. She also leaves two sisters, Shirley Costello of Branford and Janet Baker of East Hampton and 10 nieces and nephews. She was predeceased by two brothers, Joseph and George DuPlessis and two sisters, Lorraine Sibley and Elizabeth Michalke. Funeral services and burial will be private. The Beecher & Bennett-Flatow Funeral Home, 48 Cook Ave., Meriden is in charge of the arrangements.