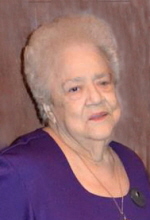 KNIPPLE, Ruth Jean (Ankeny) - 80, born February 10, 1935 in Johnstown, PA, the daughter of the late Mildred and Frank Ashbrook passed away peacefully on Friday, October 16, 2015 at Regency House in Wallingford. Her final days were spent surrounded by the love of her family. She was the wife of the late Charles Ronald Knipple. She spent her youth in Johnstown and relocated with her young family to Meriden, CT in the early 60s. A graduate of Dale High School in Johnstown, PA, Class of 1953 and attending Nursing School in Altoona, PA. She had an impressive career in nursing for more than 40 years. She was a member of Westwood Court No. 5, Order of the Amaranth and a Past Grand Royal Matron of Connecticut. She was also a Past Worthy Matron of Meridian Chapter No. 8, Order of the Eastern Star. She served many years on local and state advisory boards for the International Order of the Rainbow for Girls. She is survived by her sister, Janice (Ashbrook) Scaife of Central City, Pennsylvania, three daughters, Paula DePaulo, Gwen Rochette and Charlene Rowe and her fiancé, Jaime Tetrault, all of Meriden, her grandson, Alan DePaulo, Jr. and his wife, Nicole, of Plainville. her granddaughter, Melissa DePaulo Smith and her husband, Tyrone Smith of Meriden, great-grandchildren, Elena DePaulo, Hailey Frechette and Dion Ball, as well as several nieces, nephews and sisters- and brothers-in-law and lifelong friends. The family would like to extend their heartfelt gratitude and thanks for the love and support of their family and friends, the ICU and Pavilion D teams at Midstate Medical Center in Meriden, and especially the staff at the Regency House in the Passport Rehabilitation Program of Wallingford for their sincere caring and compassion during our mother's final days. Family will receive friends at the Beecher and Bennett-Flatow Funeral Home, 48 Cook Avenue in Meriden on Sunday, October 18, 2015 between 3 p.m. and 7 p.m. An Amaranth service will be held at 6:00 p.m. Funeral services will take place at the Funeral Home on Monday, October 19 at 11:00 a.m. Burial will be private at the convenience of the family. In lieu of flowers, donations may be made to the Connecticut Grand Court, Order of the Amaranth and specified for either the Amaranth Diabetes Foundation or the Henry P. Wirth Benevolent Fund, c/o Eleanor Carbonaro, at 548 Lisbon Rd., Canterbury, CT 06334.