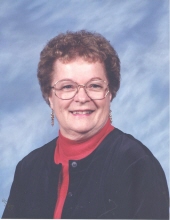 Ruth J. Roden, age 81, formerly of Orchid Rd, Meriden, passed away peacefully surrounded by her family on December 3, 2014 in the Masonic Healthcare Center. Born in Meriden on November 27, 1933, she was a daughter of the late Dudley C. Johnson & Mildred Jaquith Johnson. Ruth is survived by her sons, David & his wife Denyse Roden of Northford and Scott & his wife Diane Roden of Meriden and her grandson Michael Howell of Dade City, FL and several nieces and nephews. Ruth was predeceased by her daughter Tammi Roden-Howell and her siblings Dorothy Dutton and Dudley Johnson. Ruth was a retired school teacher for the City of Meriden where she was employed for over 40 years. She also worked as an admitting clerk for Meriden-Wallingford Hospital. She was a very active member of First Untied Methodist Church for over 70 years, chairing many committees and church functions. Ruth was past president of the sorority of Lamda Kappa Gama. She was a very avid traveler, proud that she visited every contienent around the world. She was a number one fan of UCONN basketball and an active member for many years of the Washington Park Fife and Drum Corp. The family would like to thank the staff of Masonic Healthcare Center for their wonderful, compassionate care shown to Ruth over the years. Relatives and friends may call at the Beecher & Bennett-Flatow Funeral Home, 48 Cook Ave., Meriden on Friday, Dec.5 from 5-8pm and may attend her funeral service on Saturday, Dec. 6 at 10am at First United Methodist Church, 159 East Main St., Meriden. Burial will follow at Walnut Grove Cemetery, Meriden. In lieu of flowers donations in Ruth memory may be made to the Masonic Charity Foundation, www.masonicare.org/mcf P.O.Box 70, Wallingford, CT 06492.