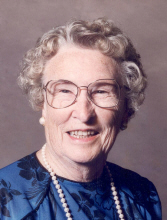 Ruth Viola Mattson, age 98, of Hamden, wife of the late Victor Mattson, passed away at the Regency House in Wallingford on August 15, 2012. Ruth was born on September 24, 1913 in Oskarshamn, Sweden to the late Adolf and Edla Gustavia Johnson. She arrived in the USA in 1928 to join her sister Anna & brother Edwin and later settled in the family home in East Haven in 1930. She was a member of the Bethesda Lutheran Church for over 70 years, she was known to be the oldest & longest member of the church. Ruth was also predeceased by her siblings, Edwin, Karl, Erik & Elin Johnson and Anna Gustafson and nieces Rose Onofrio & Doris Johnson. She leaves her nephew, Elis & his wife Nancy Gustafson of Wallingford and several other nieces and nephews and her dear friend Betty Ciarlello of Hamden who spoke with Ruth daily. Ruth's family would like to thank the staff at Regency House for their care and compassion that she received in her time of need. Her Funeral Service will take place on Friday, August 17th at 11:00 AM in Bethesda Lutheran Church, New Haven. There will be no calling hours. Interment to follow her service in Beaverdale Memorial Park. BEECHER & BENNETT FUNERAL HOME, 2300 Whitney Ave., Hamden, are in care of arrangements. In lieu of flowers contributions in Ruth's memory may be sent to Bethesda Lutheran Church, 305 St. Ronan St, New Haven, CT 06511.