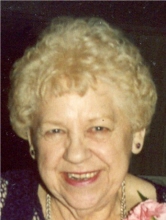 Ruth Virginia Leavstrom of East Haven died peacefully of natural causes with family members at her side on Sunday, February 26, 2012 at the Epsom Health Care Center, Epsom, NH. Ruth was born on October 7, 1923 at her parents' home in East Haven. She was the daughter of Abel Sigfrid and Ellen Virginia Wahlstrom Leavstrom. She graduated from East Haven High School where she was the lead soprano in the school chorus. Ruth worked for 42 years for the Metropolitan Insurance Company, retiring in 1985. Her record with the company was characterized by dedication, reliability and excellent customer satisfaction. Ruth was an accomplished soprano and known throughout the New Haven area for her performances in a variety of settings. She was employed as a soloist by the First Congregational Church of West Haven, the First Baptist Church of New Haven and the Hamden Plains Methodist Church of Hamden. Ruth was invited to sing on the Ted Mack television Talent Show where she was recognized for the quality of her voice and her excellent performance. Ruth also gave public performances and concerts in which she sang classical works in the English, French, German, Italian and Swedish languages. In addition, Ruth sang for many years with the New Haven Chorale, a semi-professional group acclaimed in southern Connecticut. In her childhood years she was a member of the New Haven Swedish Baptist Church and then subsequently joined the First Baptist Church with her family in 1943. She remained an active member and in her later years was recognized as the longest serving member of the congregation. Ruth was a loving, kindly, generous person who always thought of others before herself. She had a terrific sense of humor and her laugh was infectious. Her family and many friends have been enriched and blessed because of the life she lived. She was predeceased by her parents and brothers Carl E. Leavstrom, Norman F. Leavstrom and Gerald S. Leavstrom. She leaves behind her sister, Barbara E. and husband Harvey F. Harkness of Epsom, NH; nephews, Russell and wife Judi Leavstrom of Starksboro, VT, Clifford and wife Priscilla of WI, Paul Leavstrom of Miami, FL, Timothy Harkness of Epsom, NH, Jonathan Harkness and his wife Carol of Chichester, NH; nieces, Phyllis and husband Elia Mikhail of Orange, Deborah and husband Mark Lemke of WI. In Sweden she leaves cousins Peder Qvist of Stockholm, Birgitta Lowerstrom and her husband Mats of Malmo, Lillian Lofverstrom of Stockholm, Sven Gunnar Qvist of Ronneby, Marie Magnusson of Nybro and Inge Elmstrom of Sturko. A celebration of Ruth's life will be held in First Baptist Church, 205 Edwards St., New Haven, Saturday, May 5, 2012 at Noon. Interment in Beaverdale Memorial Park prior to service at 10:30 a.m. Saturday. Memorial gifts in Ruth's name may be sent to the First Baptist Church of New Haven, 205 Edwards Street., New Haven, Connecticut 06511. BEECHER & BENNETT, 2300 Whitney Ave., Hamden in care of arrangements.