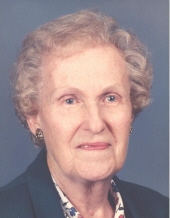 Ruth Worden Turner, 96, wife of the late Robert Lewis Turner Sr. passed away peacefully at home on Sunday, June 8, 2014 surrounded by her loving family. She was born March 11, 1918 in Waterbury, a daughter of the late Howard F. and Ruth (Connable) Worden. Ruth was a lifelong resident of South Meriden, living in the family home, as well as a member of South Meriden Trinity United Methodist Church for over 60 years. She was proud to have worked for the Yankee Silversmith Country Store in Wallingford and Weight Watchers for many years, and being a member of the Daughters of the American Revolution. Ruth is survived by a son, Robert L. Turner Jr. and his wife Jeanine of Thomaston, CT, four daughters and their husbands, Priscilla (Marcel) D'Auteuil of Cranston, RI, Edna T.(Mark) Goodison of South Meriden, Susan T. (James) Greenwood of Yalesville and Carolyn T.(Robert) Godard of Cheshire, eighteen grandchildren, twelve and a half great-grandchildren, one great-great grandchild, a niece Marilyn Zera of Waterbury and her beloved dog SuzieQ. She was predeceased by a sister Dorothy Zera and a niece, Marsha Burritt. A funeral service will be held on Thursday, June 12, 2014 at 10am at South Meriden Trinity United Methodist Church, 145 Main St., South Meriden, CT. Everyone is asked to meet directly at the church. Burial will follow at Center Street Cemetery, Wallingford, CT. Relatives and friends may call at the Beecher & Bennett-Flatow Funeral Home, 48 Cook Ave., Meriden on Wednesday, June 11, 2014 from 5-8pm. Donations in Ruth's memory may be made to the South Meriden Trinity United Methodist Church, www.smtrinity.org ,145 Main St., South Meriden, CT 06451.