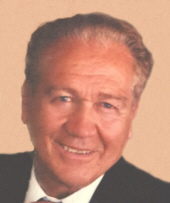 Salvatore A. Pagliaro, 86, entered into eternal rest December 22, 2016 at the WH VAMC. He was a longtime resident of North Haven, Cheshire, and Deerfield Beach, FL before moving to Hamden in 2015. He was the loving husband of Wera K. Pagliaro, who passed away in 2015. Salvatore was born in New Haven, a son of the late Michael and Melinda Ruggiero Pagliaro, and served in the U.S. Army from 1948-1952 as a Military Policeman & Medic during the Korean War. He was employed with the New Haven Police Dept. from 1956-1991 as a Detective, where he received numerous commendations and honors for his service. Loving father of Rosalinda (George) Dahlberg of Charlotte, NC, Salvina Ruggiero of East Hampton, Laura (Gary) Miller of Hamden, Vera (Michael) Geremia of Durham, and the late Michael Pagliaro. Grandfather of Jessica (Justin) Koers, Michelle, Nicole, and William Dahlberg, Amanda, Richard Jr., and Nicholas Ruggiero, and Stephen Geremia. Brother of Paul Pagliaro of North Branford, and Margaret DeLucia of California. He was predeceased by his sisters; Vera DiLieto, Anna Percopo, Mary Mauriello, Phyllis Sessa, and a brother, Peter Pagliaro. The family would especially like to thank the staff of Atria Larson Place and the WH VAMC for the excellent care Salvatore received during his stays. Funeral from BEECHER & BENNETT, 2300 Whitney Ave., Hamden Tuesday morning, December 27, at 9:30. His Mass of Christian Burial will be celebrated in St. Rita Church at 10:00 AM. Interment will follow in Evergreen Cemetery. Friends may visit with his family on Monday from 4:00-7:00 PM. Contributions in his memory may be sent to the Fisher House Foundation, 111 Rockville Pike #420, Rockville, MD 20850.