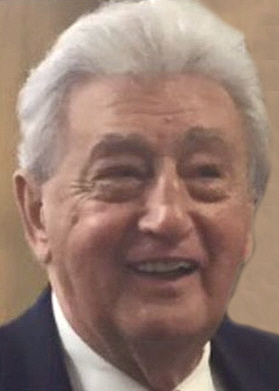 Salvatore Frank Attard, 88, of Hamden, formerly of Orange, passed away peacefully on Tuesday, March 16, 2021 with his beloved wife of 65 years by his side.
Sal was born on June 16, 1932 in West Haven to the late Frank and Josephine (Messina) Attard. He is survived by the love of his life, Carmela (Juliano) Attard, and their two children, Lisa (Heath) McMonigal and David (Maryann) Attard. Known lovingly as “Pops,” he will be missed by his 5 grandchildren; Kelly (Marc) Carrano, Kristen (Vinny) Torres, Rebecca (Michael) Walters, Elizabeth Shultz, and Royal (Megan) Attard, and his 9 great-grandchildren; Vicente, Micah, Julian, Lucia, Rosalie, Violet, Destin, Harper, and Phoenix. He also leaves behind his 2 sisters; Christine (Bruce) Ladrie and Jacqueline Attard, his 3 sisters-in-law; Maryanne Hande, Teresa DeNicholas, and Gilda Wojcik, and a brother-in-law; Thomas (Annamay) Juliano, along with his many adoring nieces and nephews, and a vast number of extended family members and dear friends.
Sal worked for many years at Armstrong Rubber Co. and was also a licensed electrician, but his favorite work was that of talking to people and teaching them about his heavenly Father, Jehovah God. As one of Jehovah’s Witnesses, he found great joy in helping people learn about Biblical truths, and also extended himself to work on many volunteer building projects throughout the US and several other countries. He was a member of the Lake Whitney Congregation in Hamden.
Sal wholeheartedly believed in a promised resurrection on earth in the near future. He expressed his desire to see all of his family and friends again in this beautiful paradise to come. He wanted to be remembered for his love of God, family, and friends, and for his endless energy and joy for life. In his own words, “I love you all dearly.”
A memorial of his life will be celebrated at a time to be determined. Contributions in Sal’s memory may be made to the Jehovah’s Witnesses at www.donate.jw.org. Beecher & Bennett Funeral Home, 2300 Whitney Ave., Hamden is in care of arrangements.