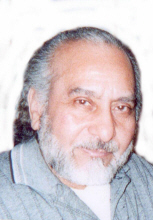 Samuel P. Rosario, 76, of New Haven, husband of the late Carolyn Rosario, went to meet his Lord on December 31, 2010. He was born in Vega Baja, Puerto Rico on January 31, 1934 to the late Eligio Rosario and Isabella Padilla. Samuel is survived by his five children, Joann, Robin, Samuel, Michael and Ricky Rosario; five grandchildren and two great grandchildren. He came to America at the age of 19 and has worked for Pratt & Whitney in North Haven for 34 years. Samuel was a great husband and father, well respected and will be remembered for his dignity and honor. He was a member of Primera Iglesia Pentecostal Remanente Fiel. His great admiration in life was walking with his Lord, Jesus Christ. Isaiah: chapter 46, verse 4. Friends may visit with his family on Wednesday, January 5, 2011 from 5:00 to 8:00 PM in the Change of Church for visiting and funeral to First Star of Jacob Church, 506 Howard Ave., New Haven, CT and may attend his Funeral Service at the church on Thursday from 10:00 am to 12 noon. Burial will be private. Arrangements are in care of BEECHER & BENNETT FUNERAL HOME, 2300 Whitney Avenue, Hamden.