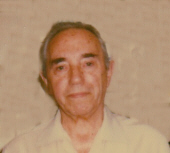 Samuel 'Sam' A. Bria, 104, husband of the late Mae Currano Bria, passed away on December 13, 2012 at his home. He was born in New Haven on March 26, 1908 to the late Thomas and Rosina Bria. Sam grew up in New Haven, until at the age of 18, moved to Hamden. He lived in Hamden for the next 82 years on Wooden St. and Belden Rd., until moving back to New Haven in 2006. He attended Truman Grammar School, was the captain of the basketball team, and in 1923 led the team to a Championship. He played basketball and football for Palmer Hills and Lafayette. After high school he continued to play basketball for Seamless Rubber in the Industrial League. Sam was also an avid ballroom dancer. He loved to dance and was called 'Dancing Sam'. When he wasn't dancing, he enjoyed bowling and playing billiards. He retired from Pratt & Whitney in 1970 after many years of dedicated service. Sam was a longtime member of Blessed Sacrament Church. Also, a lifelong Yankees fan and a UCONN Basketball fan. Sam leaves his loving friend Maria Biehler of North Branford and was predeceased by his beloved son, Richard Alan and his brother Anthony Bria. Friends may visit at BEECHER & BENNETT, 2300 Whitney Ave., on Monday, December 17th from 8:30 a.m. to 9:30 a.m. His Mass of Christian Burial will be celebrated in Blessed Sacrament Church at 10:00 a.m. followed by burial in Beaverdale Memorial Park. Contributions in his memory may be made to CT Hospice, 100 Double Beach Rd., Branford, CT 06405.