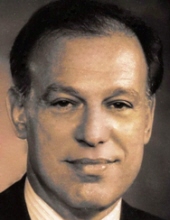 Sanford J. ('Sandy') Zimmerman, 90, of Hamden, Connecticut, formerly of St. Louis, Missouri, loving husband of 67 years to Eve Lauter Zimmerman, passed away on September 6, 2019 at the Whitney Center in Hamden. He was born in St. Louis on May 31, 1929 to the late Ely and Faye Zimmerman. Sandy is survived by his children: Jay Zimmerman and his wife Margaret, Jill Lane, and Lisa Zimmerman; his sister Susie and her husband Sid; his grandchildren: Cara and her husband James, Victoria and her husband Stan, Courtney and her husband Daniel, Ryan, Jonathan Jay, and Kyle; his step-grandchildren: Elizabeth and her husband Will, Cotton and his wife Pearl, and Susan; his great-grandchildren: Vivian, Alexander, Lola, Logan, and Landon; and his step-great-grandchildren: Grover, Tillie, and Thea. Sandy grew up in St. Louis, and received his Bachelor's Degree from Washington University. He then went on to attend New York University, where he earned his Master's Degree in Retailing and met his wife, Eve. Upon returning to St. Louis, Sandy joined the Famous-Barr Company, the city's largest department store, where he went on to become Chairman and CEO. He and Eve became civic leaders in St. Louis during the 1960s and early 1970's, during which he served as President of Downtown St. Louis and Chairman of the Boards of United Way of St. Louis, Webster University, and Oasis National Institute. In 2015, Sandy was awarded an Honorary Doctorate of Humanities by Webster University. In 1973, Sandy left St. Louis and moved to New York to become Chairman and CEO of Abraham & Straus department stores. Beginning in the 1980's and through his retirement, Sandy pursued a number of entrepreneurial ventures in the retail and real estate development fields throughout New York state, and was a pioneer in the field of multi-generational housing. For the past eight years, Sandy and Eve had been residents of the Whitney Center in Hamden, Connecticut. Sandy was a loving husband, father, grandfather, and great-grandfather. He lived every day with an extraordinary sense of optimism and compassion for all those around him. He will be greatly missed. A memorial service will be held at the Whitney Center, 200 Leeder Hill Drive, Hamden, CT at 1:00 p.m. on Saturday, October 5, 2019. Memorial contributions in Sandy's name may be made to the Lift for Life Academy, 1731 South Broadway, St. Louis, MO 63104. Arrangements are in care of Beecher & Bennett Funeral Home, Hamden, CT.