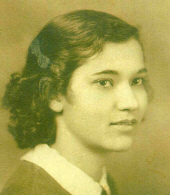 Sara Jane Dixon, age 91 of Hilltop Place, New Haven, passed away on April 29, 2011 at Arden House in Hamden. Born in Scranton, Pennsylvania on September 6, 1919 she was a daughter of the late Claurence A. Brooks and Stella Paul Brooks. Sara was a claims examiner for the former CMS Insurance Company for many years. She was a member of the Kingdom Hall Jehovah's Witnesses. Sara is survived by her daughters, Barbara Qualls and her husband Nathan of New Haven, Karen Garcia and her husband Wilfredo of Hamden; her sons, William David Dixon and his wife Jacqueline of Orange Park, FL & Robert Henry Dixon and his wife Joyce of Kissimmee, FL; her sister Lillian Brown and her husband Harry of Fayetteville, NC; 14 grandchildren and 12 great grandchildren and several nieces and nephews. Sara was predeceased by her sister, Mary Snyder and her brother Claurence Brooks, III. A memorial service will be held on May 14, 2011 at 3:30 PM at the Kingdom Hall of Jehovah's Witnesses, West Rock Congregation, 885 Wintergreen Avenue, Hamden, CT 06514. In lieu of flowers contributions in Sara's memory may be made to the church. Her interment will be private. Arrangements are in care of Beecher & Bennett Funeral Home, 2300 Whitney Ave, Hamden.