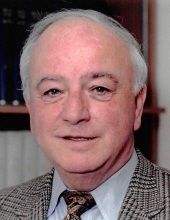 Severio Dominick Fodero, known by all as 'Bob,' died peacefully on February 6 at Hospice holding the hand of his beloved wife of 46 years, Janice Benoit Fodero. Born 87 years ago in the Fair Haven section of New Haven, Bob was the son of Italian immigrants, the late Dominick and Josephine (Lupino) Fodero. From an early age, he was taught to be honest, humble, courteous and disciplined. Bob graduated from Hillhouse High School and the University of Connecticut. Commissioned as a Second Lieutenant in the Army ROTC, Bob served as Commanding Officer of the 555th Medical Service Corps in Orleans, France. He returned statewide with the rank of Captain and joined the 340th General Hospital Army Reserve Unit in New Haven. After 30 years of service, he retired as Commander of the Unit with the rank of Colonel. Bob launched his professional career with the New Haven Board of Health. Subsequently, he joined the Yale University Student Health Service, now known as Yale Health where he retired as Associate Director after a 42-year career. With his affable manner, Bob made many friends on the Yale campus. He was honored to be a Fellow of Timothy Dwight College and a recipient of the Elm-Ivy Award for his service to New Haven and Yale. Bob also served as President of the Yale Club of New Haven, where he unabashedly admitted he had no Yale 'class.' Bob was blessed with a positive attitude and easy-going spirit. He viewed everyone as a friend and brought out the best in people. In one of his evaluations at Yale, Bob's supervisor described him as a 'prince among men.' He had the knack of seeing the folly and humor in life. With spontaneous, clever quips, he could quickly stir sedate gatherings to uproarious fits of laughter. This talent made him a popular emcee and speaker at organizational functions and retirement parties. Bob and his wife enjoyed travelling. While he drove, Janice was navigator and tour guide. They explored National Parks and historic sites in 37 states, including Hawaii. A favorite trip with Road Scholar was the 300th anniversary tour of the Louis and Clark Trail, starting in St. Louis, Missouri and ending in Astoria, Oregon. International travel included vacations in Canada, Caribbean Islands, Mexico, England, France, Portugal, Germany, Austria, Czech Republic, and trips to Italy, including Sicily. Bob credited the U.S. Army as the training ground for his leadership and administrative skills. He served as president of both the Lung Association of South Central Connecticut, and the New England Public Health Association. He was a member of the Advisory Committee of People's Bank and on the Board of Opportunity House in Hamden, a residential facility for autistic adults. Bob maintained a lifelong interest in the U.S. Military and Veterans' Affairs. During his tenure as chair of The New Haven Veterans' Affairs Committee, he initiated the now traditional Memorial Day concerts. He also co-chaired the Connecticut Army Retiree Council and served on the New England Army Retiree Council. As head of the War Remembrance Committee in Orange, he helped create a memorial garden with a brick walkway to honor residents who had served in the military. For Bob, giving back to this country was an honor and a privilege. As chair of the Orange Board of Health, he initiated 24/7 emergency transportation to area hospitals. For his contributions to the community, Bob was named a Living Treasure of Orange in 2011. In retirement, Bob joined his childhood buddies from the 'old' Fair Haven neighborhood for breakfast reunions. When he wasn't exercising at Griffin Hospital with another group of friends, he was meeting with a coffee klatch at the local McDonald's. But that's not all: he was organizer for The Mory's Military Association, an informal group of fellow retirees, whose membership requirement is military service and a sense of humor. Bob leaves his sister-in-law, Eileen Benoit of Branford, brother-in-law, Marino D'Agostino of Wallingford, nieces, Raeleen D'Agostino Mautner of Wallingford, and Angela D'Agostino Mauriello of East Haven, three grand nephews and two grand nieces, as well as his 'adopted' Laotian-American family: Mone, Vankhkam and Christina Lavarn of Meriden; Larry, Kate, Andrew and Justin Nitirouth of Meriden; and Joy and Bob Pocobello of Wallingford. He was pre-deceased by his sister, Rachel D'Agostino, brother, Richard Fodero, sister-in-law, Liz Fodero and brother-in-law, Frederick Ensling. Beecher & Bennett Funeral Home, 2300 Whitney Avenue, Hamden was in charge of arrangements for Bob's private funeral with full military honors. Family and friends will be welcomed to celebrate Bob's life at a date to be announced in the near future. Contributions in Bob's memory may be made to Opportunity House, 320 Old Hill Road, Hamden, CT, 06514 or Connecticut Hospice, 100 Double Beach Road, Branford, CT 06405 or a charity of one's choice.