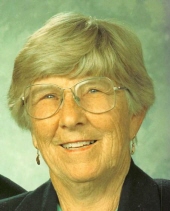 Shirley Clark Barske, age 94, passed to her Lord on Easter Sunday, April 5, 2015. She was the loving wife and 'girlfriend' of the late Elliott G. Barske whom she cherished for 71 years of marriage. Shirley was mother to Elliott Jr. (Dianne) of Anchorage, AK, Barbara Hackett of Woodstock and Jeffrey (Kim Prario) of Thompson and Clinton and sister to Bill Clark (Jean) of Wallingford. Shirley was so proud of her eight grandchildren and 5 great grandchildren living throughout the country. She was pre-deceased by her son-In- law, Gregory Hackett. Born in New Haven on September 28, 1920 to the late Arthur and Ethel Kilbourne Clark, Shirley grew up in Hamden and was in the second graduation class of Hamden High School in 1938. Shirley then received an associate's degree from Larson Junior College (Quinnipiac). Married to Elliott on June 6, 1942, she began a long life as a loving wife and mother. Shirley and Elliott moved to Pool Rd, North Haven, in 1950 where they lived for 59 years. Shirley worked for Advanced Products and was a long time employee of the North Haven Board of Education. Shirley and Elliott were avid Yale sports fans, and Shirley is noted as the writer of a letter to Yale that the Yale Band was so 'ragtag', that they should all wear 'bags over their heads' to have some uniformity. After the letter was published, the Yale Band appeared for the next football halftime all with 'bags over their heads'. 'Friendly Shirley' was active with crafts, loved to swim and dance and was in a dance troupe at the age of 80. Shirley started camping at Hammonasset in 1932 and, except for the war years, camped there every summer until 2003. Shirley was a lifetime member of the Church of the Redeemer. After retirement in 1980, Shirley and Elliott enjoyed trips to Europe, Hawaii, the Caribbean and many trips to family in Alaska. Shirley was best known for her vibrant love of life and would talk to anyone about anything, always willing to help and share her humorous opinions about life. Shirley was a devoted friend to so many from Hamden, North Haven, the Church of the Redeemer and most of all her Hammonasset camper pals. Calling hours will be held Saturday April 25, 2015 at BEECHER&BENNETT FUNERAL HOME, 2300 Whitney Ave, Hamden from 11:00 am to 12:30 pm followed by a brief Funeral Service. Burial will follow at Centerville Cemetery. In lieu of flowers, donations in Shirley's memory may be sent to the Church of the Redeemer, 185 Cold Spring Street, New Haven, CT 06511 or the Friends of Hammonasset, PO Box 271, Madison, CT 06443. To send the family a condolence, please see obituary at www.beecherandbennett.com.