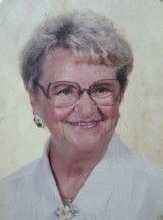 Shirley Jane Bradley Berardino, 93, passed away July 22, 2013 at the Bradley Home after a brief illness. Born in Meriden on November 17, 1919 to the late Ernest T. and Rose Moore Bradley, Shirley was a lifelong Meriden resident. In addition to raising her family, Shirley worked for many years in the banking industry. She later served as a manager with the Meriden Housing Authority, overseeing five-hundred elderly housing apartments. Shirley was a lifelong member of the First Baptist Church of Meriden where she taught Sunday school and sang in the choir. For the last thirteen years, she attended the Middlefield Federated Church. Shirley was a member of the Meriden Golden K Kiwanis Club and the Soroptomists. She also served as a volunteer driver for the American Cancer Society and as a volunteer at the MidState Medical Center for thirty years. While a resident of the Bradley Home, Shirley enjoyed weaving and won many special awards at the Durham Fair. She also served as a chaplain. Shirley was the loving mother of Jean Lee Meyers and her husband John McConaughy of New York, Jay Berardino and his wife Betsy Gara of Durham, and the late James Di Berardino. She was also the beloved grandmother of John (Tammy) Sydoriak of Wisconsin, Jim Sydoriak of Ellington, Lisa (Chris) Golebiewski of Meriden, Jon Berardino of Meriden, Jason (Bailey) Berardino of Middlefield, Rachel (Mario Lupone) Berardino of Clinton, and Jim Berardino of Durham, and beloved great-grandmother of Jamie and Jason Sydoriak, Zackary and Joseph Golebiewski and Abigail Berardino. Shirley was an amazing woman, whose twinkling blue eyes, warm smile and sage advice will be deeply missed by all of her friends and family. Relatives and friends are invited to attend a Memorial Service on Tuesday, July 30, 11:00 a.m.at the Middlefield Federated Church, 390 Main St. Middlefield. In lieu of flowers, contributions may be made in Shirley's memory to the Shirley Bradley Berardino Memorial Scholarship Fund, c/o Citizens Bank, 376 Main Street, Durham, CT 06422. The fund will benefit Meriden high school graduates interested in pursuing a career in teaching.