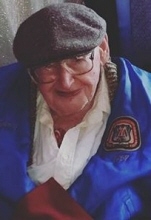 Sidney Burr Tomlinson, age 92, of Woodbridge, passed away at his home on October 31, 2015. Born in Newtown on March 5, 1923 he was a son of the late Harold & Flora Hubbell Tomlinson. Sidney was predeceased by his wife Winifred Smith Tomlinson; his sisters Ellen Dudley & Carol Hurley; his brothers Frank & Harold Tomlinson and his daughter in-law Pauline Cipperley Tomlinson He is survived by his daughters, Deborah Wilkins & her husband Richard of Ansonia and Judith Cofrancesco & her husband Alex of Bethany; his son Michael Tomlinson & his wife Diane of Woodbridge; 11 grandchildren and 11 great grandchildren. A resident of Woodbridge most of his life he was a carpenter for Local 79 AFI-CIO Carpenters Union. Sidney was a caretaker at the Darling House Museum in Woodbridge from 1973 to 1988. He was an avid traveler, proud of the fact that he would visit the highest and lowest points in every state. Sidney was a US Army Veteran and a POW after his capture in the Battle of the Bulge. He has recently tried to contact and thank the people in the town of Newburgh and in Czechoslovakia for the help he received during his captivity. Something he never forgot but much appreciated. Friends may visit with his family on Friday, Nov. 6th from 4:00 to 6:00 PM at BEECHER & BENNETT FUNERAL HOME, 2300 Whitney Ave, Hamden. Military Honors will take place at the funeral home at 6:00 PM. Friends may also attend his Memorial Service at 12 noon on Sunday, Nov. 8th in the Bethany Town Hall, 40 Peck Road. Interment will be private. Contributions in Sidney's memory may be made to the Wounded Warriors Project, P.O. Box 758517, Topeka, KS 66675.