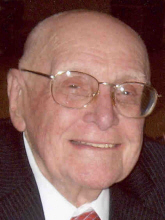 Sidney Thomas Trower, retired Hamden Fireman, 96, husband for 63 years to the late Eileen Blanchard Trower, passed away on April 12, 2011 at CT Hospice. He was born in New Haven on April 8, 1915 to the late Burt and Beatrice French Trower. Sid leaves his two daughters, Sylvia Bontatibus of Meriden and Barbara Wysopal of North Haven; grandchildren, Pamela Biewald of Branford, Kimberly Clark (Stephen) of West Haven, John and Matthew Barnes both of Meriden, Carl Wysopal (Blanche) of Guilford, and Paul Wysopal (Christy) of TX; nine great-grandchildren, Danielle Criscuolo, Nicole Daley, Michelle Trotman, Stephen and Michael Clark, John and Tyler Barnes, Oriel and Conrad Wysopol; six great great-grandchildren, Brian, Jackson, Ricky, Lucas, Savannah, and Marchello; sister-in-law, Joan of Brookfield, VT. Besides his wife and parents he is predeceased by his brother Daniel. Sid lived in Hamden most of his life having moved to Branford and most recently to Meriden to be with his daughter. His first job out of high school was as a butler to the family of the late Brewster estate. Sid's next employer was the Town of Hamden where he was a fireman for 30 years until his retirement in 1981. He also worked part-time for Sears for over 20 years. St. Peters on the Hill and then Grace & St. Peters church was his parish where he also was the sexton for 15 years. When Sid was not working and after retirement he enjoyed golf, hunting, reading, and most of all he loved to spoil all of his grandchildren. Sid's family would like to send a special Thank You to the VNA and CT Hospice for the amazing care given to their father and grandfather. Funeral from BEECHER & BENNETT, 2300 Whitney Ave., Hamden, Friday April 15th at 10:30 a.m. followed by his Funeral Service at 11 a.m. in Grace & St. Peter's Church, 2925 Dixwell Ave., Hamden. Friends may also visit with his family at the funeral home on Thursday evening (TODAY) from 5 to 8 p.m. Interment will take place in Beaverdale Memorial Park. Contributions in Sid's memory may be sent to CT Hospice, 100 Double Beach Rd., Branford, CT 06405.