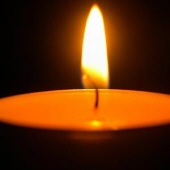 Sonya Kissel Tetmeyer, 102 died peacefully at her home in North Haven on September 22, 2014. She was born in Minsk, Russia April 26, 1912 to Mary and Kusma Kissel. Her father traveled to the United States with plans to find work and housing and bring his young family to join him in New Haven. World War I and the Russian Revolution intervened with their plans. Sonya and her mother were stranded in Russia and Poland unable to join him until 1920. Sonya was raised and lived in New Haven for 47 years before moving to North Haven where she lived 46 years. She married Gus Tetmeyer in 1935. They had two children, 3 grandchildren and 1 great grandchild. She worked many years at Hillhouse High School as a pastry cook and cashier. She is preceded in death by her parents and husband, daughter Jean Tetmeyer Gillen, sisters-in-law Lucy Bozzuto Kissel and Charlotte Tetmeyer Gleason and grandson Peter Gillen, brother Lawrence Kissel, brother in law William Kelly, and son-in-law Eugene Gillen. She is survived by son William Tetmeyer, loving sister Violet Kissel Kelly, granddaughters Jennifer Gillen Purcell and Wendy Gillen Amenta, great grandchild Thomas Purcell, daughter-in-law Sue Tetmeyer, nieces and nephews Judy Kissel Mckay, Sue Kissel Jordan, Lawrence Kissel, Carole Swanson Hansen, and Gerald Gleason. To everyone who knew her, Sonya was a remarkable woman in rapidly changing times. She traveled throughout Europe and America with her travel loving husband and opened their home to visitors from near and far. She worked hard and well. Most important to her and to them she gave care, love, calm and optimism to family and friends, treasured her home and church and never ceased to love a good time. To honor, remember and say farewell to Sonya, her family will welcome friends to join them on Saturday, Sept. 27 from 9-10 a.m. at the Holy Transfiguration Orthodox Church, 285 Alden Ave., New Haven followed by a Christian Burial Service at 10 a.m. Interment will follow in Beaverdale Memorial Park. Arrangements in care of BEECHER & BENNETT, 2300 Whitney Ave., Hamden. In lieu of flowers, contributions in Sonya's memory may be made to the Holy Transfiguration Orthodox Church, 25 Kohary Drive, New Haven, CT 06515. For information or to send a condolence please see obituary @www.beeecherandbennett.com.