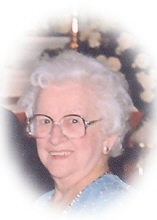 Sophie B. went home to be with the Lord after a short illness on Saturday, May 24, 2008 at Yale New Haven Hospital. She was the wife of the late Raymond M. Favereaux, Sr. Born December 17, 1913 in Meriden, she was a daughter of the late John and Katherine(Chudzik) Kutyla. She had been a waitress for many years working in Meriden's finest restaurants. She began her career at The Cabin, continued on at Ramini's and finally at Johnny's on South Grove. She had many loyal customers and knew all of them by name. Her best customers were her 3 grandsons who called her 'the best cooker in the world'. She left waitressing and went on to work at Thompson Candy as a foiler, finally retiring in 1990. She loved her daughter, Andrea with whom she made her home. She was proud of her son, grandsons and great-grandchildren. We will miss you, Grammy, but we know we will see you again in heaven. Sophie is survived by a daughter, Andrea Favereaux of Meriden, a son, Raymond M. Favereaux Jr. and his wife Valerie of Meriden and three sisters, Victoria Adamowicz of New Britain, Viola Stabach of Meriden and Irene Hamelin of Meriden, She also leaves three grandsons, Brian Favereaux and his wife Karen of Cromwell, Aaron Favereaux and his wife Danielle of Round Hill, VA and Steven Favereaux of Meriden, and four great-grandchildren, Nathan and Alivia Favereaux of Virgina and Gavin and Brandon Favereaux of Cromwell. She was predeceased by three sisters, Agnes Lenart, Mary Patzke, and Jean Grunwald A Mass of Christian burial will be held on Wednesday, May 28, 2008 at 10:00 a.m. at St. Stanislaus Church, Akron St., Meriden. Burial will be at the convenience of the family. Relatives and friends may call at the Beecher & Bennett-Flatow Funeral Home, 48 Cook Ave., Meriden on Tuesday, May 27 from 5-8 p.m.