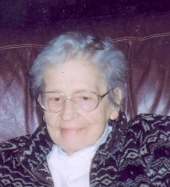 Meriden-Sophie (Sophia R.) Wilkey who lived an accomplished and loved-filled life, died on Tues., Jan. 10, 2006. She was born in Meriden, CT on Aug. 12, 1917 to loving parents, the late Onufry and Helen (Tratinka) Rakesky, both immigrants from White Russia (Belarus). Sophie graduated from Meriden High School in 1935, from the University of Connecticut with a Bachelor's of Science degree in mathematics in 1939, and from the University of Michigan in 1944, with a Master of Science in mathematics. During her life, Sophie held a variety of rewarding and satisfying professional positions including her experiences as a statistician for the W.K. Kellogg Foundation in Battle Creek, MI and as a math teacher in the Meriden School System. She was an accomplished teacher who believed in the potential and abilities of every individual and dedicated herself to this passion. During her teaching career, spanning 31 years, Sophie encouraged others to ask questions, to challenge wrongdoing and to always do their very best. Sophie was a champion for education and was committed to working hard; her thirst for learning inspired her teaching. She was a creative and resourceful woman, who had an amazing ability to remember people and details, even to the end. She enjoyed music, dancing, reading, languages, traveling, volunteering and spending time with her family. Sophie loved her family very much. Sophie was predeceased by her loving husband of 58 years, Elmer L. Wilkey, her sister and best friend, Katherine Rivera, M.D., her stepson, Elmer Dean Wilkey, and her son-in-law, Joseph Volpe, Jr. She is survived by her children, HelenAnn Volpe of Portland, OR, Katherine (and William) Grussi of West Haven, Michael (and Babby) Wilkey of Hopkinton, NH and Robert (and Phyllis) Wilkey of Meriden. Sophie also leaves her sister, Nadja (Negel) Marry of Newton, MA and two stepchildren, Dewey (and Shirley) Wilkey of Astor, FL and Felix (and Kay) Wilkey of Evansville, TN. Sophie is also survived by her nine grandchildren - Christopher, Katrina, & Alex Volpe, Andrew & Benjamin Grussi, and Ian, Caty, Alie, & Colin Wilkey - who were a very important part of her life. With special mention, Sophie leaves Michael & Pauline Marry and Laurie & Michael Pellegrino and their families, and her nephews, Christopher and Victor Rivera. Sophie had countless others who cared about her, making a thoughtful difference in her life. Family and friends may call this Friday, January 13th, from 4 - 8 p.m. at the BEECHER & BENNETT FLATOW FUNERAL HOME, 48 Cook Ave., Meriden, CT. Burial at Walnut Grove will be private. In lieu of flowers, contributions may be made to the Foundation Fighting Blindness, Inc., P. O. Box 17279, Baltimore, MD 21203-7279 (http://www.blindness.org.)