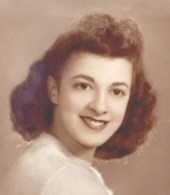 Stella Firine Camputaro, of Hamden, died on February 27, 2018 at the Mary Wade Home with her daughters by her side. Born in New Haven March 16, 1924, she was the daughter of the late Salvatore and Theresa Mendillo Firine. She is survived by her daughters, Ann (Chip) Chieppo and Debra Camputaro, and grandson, Chris Camputaro. Though we are deeply saddened by our loss, we are comforted in knowing that she is now reunited in heaven with her husband, Nicholas; son, Nicky; daughter-in-law, Philomena, and granddaughter, Cole. Stella was also predeceased by sisters; Marjorie Conte, Jean Caccioppo, Madeline Falco, Rose Cimino, and Ann Grayson and brothers; Joseph and Charles Firine. It would take volumes to do justice to the life of this remarkably selfless woman, but like Stella herself, this will be short and sweet. She was an amazing wife, mother, grandmother, aunt, and friend. Her heart and home were open to all and her generosity knew no bounds. Stella was also a mother figure to many who had either lost their moms or lived a distance away from them, always available to listen and advise without being intrusive. She connected easily with children as she herself was so young at heart. Stella was stoic in the face of many family losses and gave strength to those of us who remained behind. In her later years she still had a twinkle in her eye and a mischievous grin, which will be greatly missed at the Mary Wade Home, where she resided for the last 6 years. Stella was a gift from God to those fortunate enough to be a part of her life. We would like to thank Doreen Mosko, Ron Bowen and Sharon Albone for their guidance and support. We would also like to thank the entire staff of the Mary Wade Home for their steadfast devotion to Stella’s comfort and well being. They went above and beyond in their compassionate care of mom and our family. Friends may visit with her family on Friday from 8:30 to 10:30 AM at the BEECHER & BENNETT FUNERAL HOME, 2300 Whitney Avenue, Hamden. A Mass of Christian Burial will be celebrated at 11:00 AM in St. Anthony’s Church, 70 Washington Avenue, New Haven, 06519. Burial will follow in Beaverdale Memorial Park in New Haven. In lieu of flowers, please send donations in Stella’s memory to the Mary Wade Cheer Fund, 118 Clinton Avenue, New Haven, CT 06513. “A little nonsense now and then is relished by the wisest men”