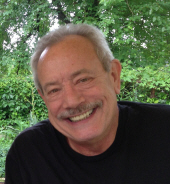 Stephen P. Nista, age 64, passed away at his home in Hamden with loved ones by his side on Sept. 19, 2014. Born on April 29, 1950, he was a son of the late Constantine 'Gus' and Cora B. Bergman Nista and the beloved father of Phillip Nista, of Hamden, and Jennifer Struzinski, of Clinton. In addition to his children, he is also survived by his best friend and the love of his life, Patricia (Dillon) Nista, a brother, Daniel F. Nista, of Hamden and a sister, Sandra Munroe, of Cornish, NH. He is predeceased by his brother, Michael Nista. Stephen was employed for over 29 years as a diesel mechanic at CT Transit Company until his retirement in 2012. A celebration of his life will be privately held by his family. BEECHER & BENNETT FUNERAL HOME, 2300 Whitney Ave., Hamden is in care of the arrangements. In lieu of flowers, donations may be made in Stephen's memory to the American Lung Association at www.lung.org/donate or to the American Cancer Society at https://donate.cancer.org/index.