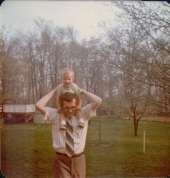 Meriden- Steven R. Sigler, 74, husband of Carole (Davis) Sigler, passed away at his home on Friday, October 3, 2014. He was born on October 26, 1939 in Osceola, Nebraska, son of the late Dewey and Mildred (Johnson) Sigler. A graduate of Westminster Choir College and Hartt School of Music, Steve was an organist and choir director for many churches during his life, including the First Congregational Churches in Portland, Terryville, Bristol, South Glastonbury, North Branford, Meriden, and Newington, as well as Christ Church Cathedral in Hartford. Steve was also a veteran of the U.S. Army, serving during the Vietnam War era. In addition to his wife Carole, he is survived by his son, Jonathan Sigler and his wife Rita of South Windsor; his daughter, Sarah Sigler and Christopher Foley of Bristol; and three grandsons, Timothy and Jason Sigler and Anthony Foley. He also leaves two sisters, Ruth Johnson of Nebraska and Mary Gaile Tomasek of Texas, as well as many nieces and nephews. He was predeceased by his two brothers, Sidney and Douglas Sigler. A memorial service honoring Steve's life and music will be held in the future. In lieu of flowers, donations in Steve's memory may be made to the National Parkinson's Foundation, Gift Processing Center, P.O. Box 5018, Hagerstown, MD 21741 or at www.parkinson.org. Serve the Lord with gladness! Come before his presence with singing. Psalm 100:2