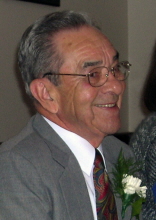 Stuart Allan Young passed away on the morning of May 17, 2013, at Masonicare in Wallingford. A life-long Meriden resident, Stuart was born on November 2,1924 to the late Allan and Matilda Young. Though he studied pre-dentistry at the University of Connecticut, Mr. Young would follow in his maternal grandfather's footsteps as an artist, designer, and craftsman. Stuart designed silver and pewter hollowware, first for Wallace Silversmiths, and then for International Silver Company, retiring as the latter's Director of Design. Products that Mr. Young designed were exhibited at the New York World's Fair 1964-1965. He was also a prolific painter, furniture restorer, and ornamental designer. Mr. Young is survived by his wife of 58 years, Alice K. Young, as well as a son Jeffrey A. Young, and a sister Phyllis M. Steward of Meriden. Relatives and friends may call on Monday May 20 from 4-7pm at Beecher & Bennett Flatow Funeral Home, 48 Cook Avenue in Meriden. His funeral procession will leave the funeral home on Tuesday May 21 at 10:30 for a service at 11am in the First Congregational Church, 62 Colony Street in Meriden. Burial will follow in Walnut Grove Cemetery. In lieu of flowers, the family suggests donations be made to the Meriden Humane Society, 311 Murdock Avenue Meriden, CT 06450, in memory of Stuart.