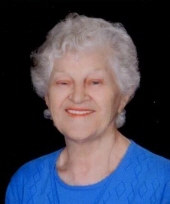 Susan J. (Reame) Lupo, age 89, of Hamden, passed away on August 16, 2016 at the Masonicare in Wallingford. Born in New Haven on August 17, 1926 she was a daughter of the late Alesandro & Christina (Petrillo) Reame. She was the widow of John Lupo. Susan is survived by her sons, Gabriel L. Lupo, Lieutenant HPD, John P. 'Jay' Lupo and his wife Lori of Wallingford and her grandchildren, Julianna Lupo of Wallingford and Capt. John E. Lupo USAF and his wife Jody Lynn of Las Vegas NV. She was predeceased by her sister Pauline Fowler and her brother Francis Reame. Susan was a graduate from Commercial High School in New Haven. She was a former employee of Goodyear Rubber Sundries making rubber rafts during the war. Sue also was employed at Winchesters and was a School Crossing Guard for the Hamden Police Department. She concluded her career after 23 years as a Probate Court Clerk with the Town of Hamden. Susan enjoyed music, sports and all people, she was a member of St. Ann's Church Young at Heart Club and sang in the church choir. Friends may attend her funeral on Friday, August 19th at 9:00 AM from BEECHER & BENNETT FUNERAL HOME, 2300 Whitney Ave, Hamden, with her Mass of Christian Burial to be celebrated at 10:00 AM in St. Ann's Church. Interment will follow in Beaverdale Memorial Park. Friends may also visit with her family at the funeral home on Thursday from 4:00 to 8:00 PM. Contributions in Susan's memory may be made to St. Ann's Church, 930 Dixwell Ave, Hamden, CT 06514.