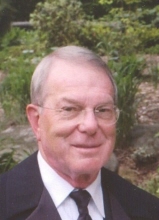 Terence 'Terry' W. Ede, age 73, of Bethany, passed away on October 18, 2011 at Griffin Hospital. He was born on April 15, 1938 in Kelloe, England to the late Walter and Winifred Webb Ede. Terry is survived by his loving wife Eileen Thompson Ede; children, Helen Ede of East Haven and Martin Ede of Bethany; siblings, Janice Jack of Durham, England, Norma Hunter of Staffordshire, England, Lynn Harding of Chester-le-Street, England, and Byran Ede of Anfield Plain, England. Terry started out his career as an electrical engineer in Electrocil, UK and moved to Sealectro Ltd in 1970 becoming a Commercial Director. In 1984 he became General Manager of STC-Opto-electronics Unit, UK. He received the opportunity to move to the US in 1985 to become President of Sealectro Corp. In 1989, he joined Dover Technologies as a group President. Under Dover, Terry became President of Vectron International, CTI, Telefilter, Dielectric Labs and Arcom. After an early retirement in 2002 he still remained a consultant for a number of electronics companies. He was a member of the Bethany Lion's Club and had been a member of Oak Lane Country Club in Woodbridge for many years and recently a member of the Oronoque Country Club. Terry loved his family, including many cats and dogs as well as golf and his many friends. His Funeral Service for will be held on Monday, October 24th at the First Church of Christ, 511 Amity Rd., Bethany at 10 a.m. Friends may also visit with his family on Sunday from 4 to 7 p.m. at BEECHER & BENNETT FUNERAL HOME, 2300 Whitney Ave, Hamden. Burial will be private. In lieu of flowers, contributions in Terry's memory may be made to S.P.C.A. of CT, 359 Spring Hill Rd., Monroe, CT 06468